Crickets in a meadow: does mowing improve habitat? 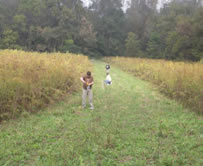 This path in the meadow was inadvertently
mowed during the summer by one of the
Nature Park staff members.

Last summer, a groundskeeper at DePauw inadvertently mowed a path through the middle of a meadow at the Nature Park.  What was the result?  Tons of insects, especially crickets, were more visible in the newly mown trail than in the tall grasses of the unmown  meadow.  Why?  Were insects responding to warmer temperatures in the mown trail?  Were crickets attracted to the warmer environment of the trail? 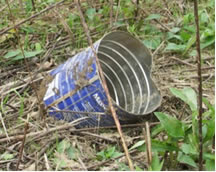 Flooding in the meadow interfered with the
monitoring because the raised water table pushed
the pitfall traps out of the ground.

Our study was disrupted in part by disturbance of our traps.  Flooding in the meadow pushed the traps above ground level so they were no longer effective!  In the future, it would be appropriate to collect data over a longer time period at more plots and along more mown paths. 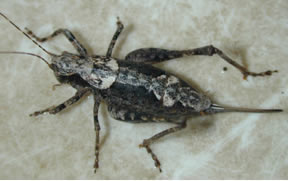