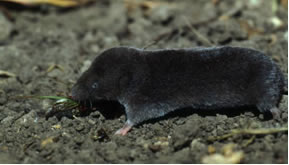 We ran the traps for three nights at each site during late October and early November, 2003 to 2006. We set 40 traps each night. The traps were located along transects, 100 m long, with traps placed 10 m apart along each transect. We trapped in forest habitat in the Arboretum and in open meadows in the Nature Park. We baited the traps with sunflower seeds and checked the traps at dawn and dusk. When we caught an animal, we identified it, weighed it, marked it with a dab of fingernail polish on one its rear toes, and released it. 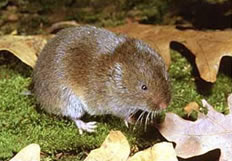 What does the data mean? 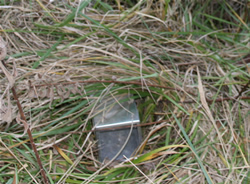 A Sherman trap nestled in the grasses in a meadow
at the Nature Park. This is typical habitat for meadow voles
which build tunnels and runways through the meadows.

Populations declined a lot in the Arboretum from 2003 to 2006. Perhaps the populations declined because of higher activity of people. A new trail was built in the Arboretum during 2004. This is the C1 connector trail that connects DePauw's campus to the Nature Park. Lots of people walk on this trail all the time. Perhaps small mammals have been displaced from this area due to the increase in human disturbance.

Populations have fluctuated a lot in the Nature Park. Again, these fluctuations could be due to the increase in human activity. One of our trap lines was formerly located at the site where the Welcome Center was constructed. After the Welcome Center was built, we moved this trap line across the road and placed the traps along the stream at the base of the limestone cliffs. The other three trap lines have stayed in the same place. But there has been higher human activity in the general vicinity of our trap lines throughout the year, perhaps displacing small mammal populations to alternative areas where there has been less disturbance. 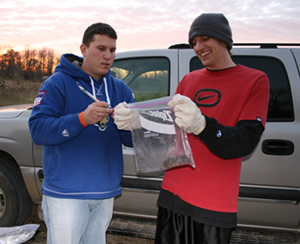 The students transferred the small mammal from the Sherman
trap into a ziploc bag. Now they're ready to weigh the
mammal using a spring balance.

The causes of these population fluctuations are unknown. All we can do is speculate. But we will continue running the trap lines during future years, at the same sites, at the same time of year. It will be interesting to see if the population levels continue fluctuating.

Students have raved about this experience, saying it was their favorite project during the semester.  But students were disappointed by the low capture rates in 2006. Meanwhile, we have collected interesting ecological data on the rises and falls of small mammal populations, especially in relation to human disturbance.