White-footed mice live "on the edge" in the Nature Park 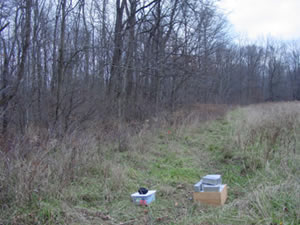 This photo illustrates the type of habitat where
trapping was conducted. Trap lines extended
across forest, field, and edge habitats.

We assessed distribution and movement patterns of white-footed mice (Peromyscus leucopus) in different habitats at the Nature Park.  We expected to find marked differences in population levels related to habitat types.

We trapped mice using Sherman traps at two sites in the Nature Park.  There were five transects at each site.  Each transect extended across forest, field and ecotone habitats.  Transects were 10 m apart and traps were placed at 5 m intervals along each transect.  We trapped for two nights at one site and for four nights at the other site.  All mice were weighed, tagged, and released at the location of capture.

We only caught three mice during our trapping sessions but all three mice were caught near or at the edge between the forest and field.  Our results were inconclusive but suggest that white-footed mice prefer to inhabit edge habitat between forests and fields.  Dense thickets of multiflora rose bushes may provide more food and protection from predators.