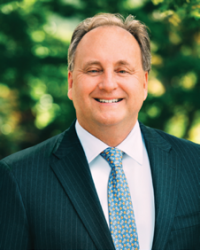 Bob Torkelson, President and Chief Executive Officer of Trinchero Family Estates, has spent his entire career in the wine industry.

Upon graduation from DePauw University in Greencastle, Indiana, he joined the E&J Gallo Winery as a member of their management development program in Los Angeles. In 1987, Bob assumed the responsibility of General Manager for Gallo’s business in Southern California, Arizona, Nevada, Hawaii and New Mexico. In 1990, Bob joined Lovotti Bros. Distributing Company in Sacramento, California as General Manager, responsible for all facets of a $50 million wine wholesale operation.

In May 2017, Bob was appointed to his current role of President and Chief Executive Officer, assuming responsibility for the second largest family-owned wine business in the United States, and its dynamic, diverse portfolio of brands.

Bob lives in Napa Valley with his wife, Marie, and their two children.