Kevin Kinney and his students are researching the interaction between the nervous system and immune system in reptiles.  Despite volumes of research done on other species, reptile immunology is still a bit of a mystery. 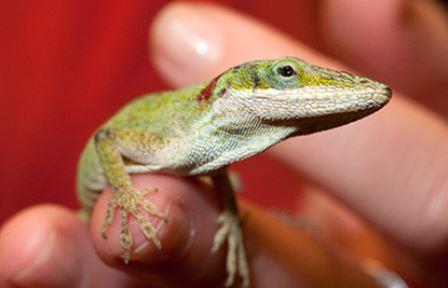 Professor Kinney and his students, Alicia Whitney ’13 and Ethan Hindsley ’14 used the tiny green anole, a lizard found in the southeastern U.S., to determine whether stress affects immune function.  Alicia and Ethan began the test by injecting phytohemagglutinin, a minor irritant extracted from plant tissue, into the lizard’s hind foot, and then measured the amount of swelling.  The amount of swelling was used as a measure of immune function.  Professor Kinney states, “There may be implications for animal well-being.  Different stressors may affect animals’ ability to resist disease, and this may be important for animals in captivity, or even in the wild.” 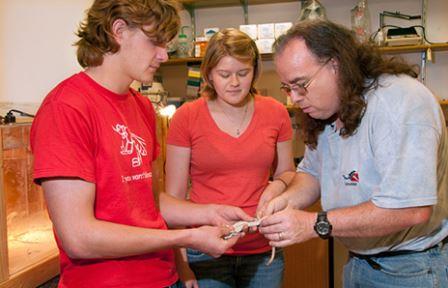 Alicia and Ethan became skilled in the art of lizard wrangling and recognized many of their test subjects by appearance alone, just in case the lizards shed their skin.  “The lizards make working with them a little more entertaining since you never know exactly what's going to happen,” Ethan says.  Alicia agrees. “They definitely keep you on your toes,” she says. “It's a lot of running around and attempting to get them to cooperate with us while we try to collect our data as quickly and accurately as possible.”

Other recent projects conducted by Professor Kinney and his students:

·       --Investigating neutrophil extracellular traps in the African clawed frog with Emily Jones and Kelly Hoerst.
--Behavioral, physiological, and molecular aspects of fever in reptiles with Ethan Hindsley and Alicia Whitney.
--Development of a graft response model in goldfish with Annie Collier, Diane Fernandez, and Rebecca Maddrell.

Back to research profile listings.