Shortly after DeMotte's resignation in 1891, Joseph P. Naylor, head of the Indiana University physics department, was persuaded to come to DePauw as the new professor of physics. As the story goes, Naylor decided to accept DePauw's offer because he felt that "DePauw had a greater future...and a better [base]ball team." Indeed, at the time DePauw was the largest institution of higher learning in the state and had a relatively well-established physics program. 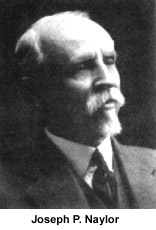 Naylor, a native of Pennsville, Ohio, had done some undergraduate work at Adrian College in Michigan before joining the work force as a watchmaker and draftsman. In 1881 he returned to academia to teach high school physics in Indianapolis and two years later entered Indiana University in pursuit of a graduate degree in physics. In 1885 he became among the first to receive an M.S. degree in physics from that institution; the following year, he was named professor of physics there.

The physics program taught by Naylor in his first year at DePauw consisted of six courses. Courses One and Two were the first and second semesters of the introductory physics course; lecture sessions met four times a week and an additional six hours per week were spent in the laboratory. Course Three, Theory of Electrical Measurements, was a staple of the curriculum for the next 70 years; laboratory investigations of magnetism, static electricity, and direct current circuits were the main order of business. Theory of the Dynamo/Electric Lighting and Photometry was the title of Course four, which in a few years became a more general Advanced Laboratory course. Finally, Courses five and six, Mathematical Physics, were a catch-all for various advanced treatments of vibratory motion, sound, electromagnetism, optics, and thermodynamics; the topics were varied each year to meet the needs of the students. In time, as department offerings became more diversified, many of the subject areas in Mathematical Physics were split off into separate courses.

In the 1890s, visitors to campus in search of the physics department would be directed to the building known as Middle College, a four-story structure that stood on the location presently occupied by Harrison Hall. On the first floor of Middle College were the physics lecture and reading rooms, an equipment room, a machine shop, and an area for the general laboratory; in the basement, a 15-horsepower engine chugged away, driving three dynamos that furnished current for the electrical experiments upstairs. The labs were outfitted with several fine instruments, including what was then one of the best spectrometer gratings (made by Henry Rowland of Johns Hopkins, with approximately 15,000 ruled lines per inch) in the United States.

Many of the instruments used for classroom demonstrations and lab experiments were designed and assembled by Naylor himself. Most of his efforts concentrated on devices for electrical and optical measurements; he made several different types of galvanometer and electroscope, a Wheatstone bridge, a heliostat (which he nicknamed "Joshua"), and two types of interferometer. These apparatus have survived decades of student use and today form part of the "History of Physics at DePauw" exhibit in the Science Center. The Naylor instruments, priceless in terms of their uniqueness and historical value, form a lasting tribute to the craftsmanship of DePauw's last classical physicist. 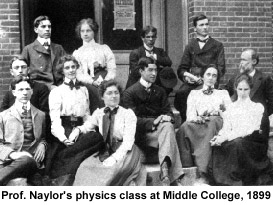 In 1902, the physics department moved out of its cramped quarters in Middle College and into the south wing of the newly completed Minshall Laboratory. The new science facility, built with a gift of roughly $60,000 from D.W. Minshall and his family, provided much-needed classroom and laboratory space for the increasing enrollments in physics and chemistry. The main entrance to the building faced west along South College Avenue, almost directly across from the present location of the Phi Psi house. Advanced lab rooms and a machine shop were located on the first floor. The physics lecture room was on the second floor, together with areas for a library, recitation classes, and a photography darkroom. The general physics laboratory met in a large room on the third floor. As was the case in Middle College, dynamos in the basement provided current for lecture demonstrations and lab work.

In terms of faculty, equipment, and facilities, DePauw now had a solid physics department. The main attraction was Professor Naylor, who had quickly become a favorite among the students. Naylor was a Santa Claus-like figure in both appearance and personality; it was said that "behind those drooping mustaches was a smile for every student." His lectures were delivered with flair and enthusiasm, and were punctuated by demonstrations, personal anecdotes, and tales of the historical development of physics. Little wonder that, moving into the second decade of the new century, the number of students taking the introductory course in physics had risen to about 60 per semester, with another dozen students enrolled in upper-level courses. As physics goes, a relatively large chunk (about 10 per cent) of the student population sat through Naylor's lectures in Minshall Laboratory.

For many years, Naylor handled both the lectures and laboratories himself, with only occasional help from student lab assistants. However, when Douthitt Ayres was asked to stay on as an assistant in physics after the 1902 commencement, the trend toward a two-person physics department was begun. For the next dozen years recent college graduates like Ayres, Karl Fussler, and Charles Skinner conducted seminars and handled most of the introductory lab chores.

In 1915, Charles Brightman, a man with considerably more academic experience than the young assistants, was brought to campus to teach some of the advanced courses in physics. Brightman had taught at Wesleyan University and Mount Holyoke College and, more significantly, he had recently completed his Ph.D. at Clark University, making him the first faculty member at DePauw to hold a doctorate in physics. 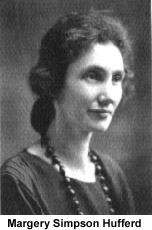 Although Brightman resigned after only two semesters, he did have some impact on the physics program, introducing two new courses, Modern Theory and Alternating Current Theory, into the curriculum. The Modern Theory course is the first effort at bringing the new physics of radioactivity and atomic structure into the DePauw classroom. Over the years, this course has evolved into the standard sophomore-level introduction to relativity and quantum theory.

Brightman's replacement in 1916 was George Gorrell (A.M., Ohio State, 1914), whose teaching responsibilities were split between the mathematics and physics departments. Gorrell handled the courses in Modern Theory and AC Theory; Naylor taught the introductory class and the remaining advanced courses. In terms of the number of course offerings, the period 1915-18 was the heyday of physics during Naylor's years at DePauw. But this flurry of activity ended in 1918 after Gorrell relinquished his physics duties to become assistant professor of mathematics; Naylor, now 65 years old, was once again a one-man department.

The most promising applicant for Gorrell's position was a young physicist teaching lab courses at Iowa State University; the only "problem" was, the applicant was a woman. Margery Simpson had just finished her master's degree work at Iowa State and was looking for a permanent teaching position; the opening at DePauw seemed ideal. Although her qualifications were good, her application was put on hold and she was told quite bluntly by the administration that they would "much prefer a man". Simpson was eventually hired as an instructor in physics for the 1919-20 academic year simply because no qualified man could be found.

Simpson was mainly responsible for the introductory labs, but she also taught a course called Radio Principles and, occasionally, a course designed to meet the needs of secondary school teachers. The course in Modern Theory was not offered during the remaining years of Naylor's tenure at DePauw; apparently, neither he nor Simpson felt comfortable with the subject matter.

In January 1925, Professor Naylor announced that he would retire in the spring. The "vacation" was a long time coming-- for 34 years, Naylor had taught two or three (and sometimes four) classes a semester without a leave of absence. In his own words: "I have a bad case of science indigestion... Now I will have a chance to get some ideas out of my system." As professor emeritus of physics, Naylor continued to maintain an office/laboratory in room 8 of Minshall Lab for several years after his retirement. When he finally said goodbye to DePauw in 1930 (he spent the last years of his life with his daughters in Arkansas), he left two gifts in parting: his collection of hand built apparatus, and his entire 500-volume library of physics and mathematics textbooks. (A number of these books have been lost over the years. Those that remain can be found on the shelves of the McKim Observatory library, or in storage in the Science Center. Some of Naylor's books date back to the 1850's and are today very rare, although one of the most valuable--a 1731 edition of Newton's Optics-- has disappeared from the collection.)

In his time, Naylor was one of Indiana's most prominent physicists. He was a founder and president of the Indiana Association of Physics Teachers; he was also present at the organizational meeting of the Indiana Academy of Sciences, later becoming a fellow of that society. Perhaps Naylor's greatest professional honor was his 1907 election to membership in the American Physical Society, which in those days had a total national membership of only about 50. 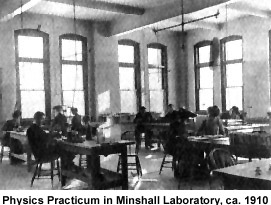