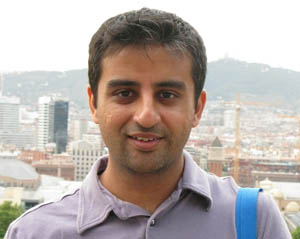 Nahyan Fancy did his B.A. from Knox College and his PhD in History and Philosophy of Science from University of Notre Dame. His research interests are in medieval Islamic science and medicine, and intellectual history. He has been teaching Middle Eastern History and History of Science at DePauw since 2006. Although most of his courses address issues and themes on gender, he also regularly offers a course on Gender & Sexuality in the Middle East.

His "The Virtuous Son of the Rational: A Traditionalist’s Response to the Falāsifa" has recently appeared in an edited collection, Avicenna and His Legacy: A Golden Age of Science and Philosophy, ed. Y. Tzvi Langermann (Brepols, 2009). His "Re-Examining the Reason-Revelation Dichotomy in Islamic Societies: The Case of Ibn al-Nafīs and his Discovery of the Pulmonary Transit of Blood" will shortly appear in a collection of essays on The Advancement of Knowledge, edited by Sabine MacCormack. He is currently working on a book manuscript tentatively entitled, "Science and Religion in Medieval Egypt."