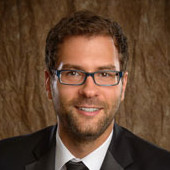 Eric Schmidt joined the faculty at the DePauw School of Music in 2018. He is the Director of Choirs and teaches classes in the school’s 21CM Initiative. Outside of the University, he works extensively as a performer, studio conductor, and clinician.

In summer 2019, Eric was the Chorus Master at the Grand Teton Music Festival preparing the Utah Symphony Chorus for performances of Carmina Burana under the baton of Donald Runnicles. Prior projects at the Utah Symphony have included collaborations with Thierry Fischer, Jun Märkl, Markus Stenz, and Barlow Bradford for more than a dozen masterworks including Mahler’s Symphony No. 2, Mozart’s Mass in C minor, Berlioz’s La Damnation de Faust, and Verdi’s Quattro pezzi sacri. In 2016, he made his own debut with the Utah Symphony conducting Handel’s Messiah.

Eric has conducted several professional orchestra and choir recordings in Hollywood and Utah. During his time in Salt Lake City, he was the Associate Conductor of the Utah Chamber Artists, directed the Chancel Choir at First Presbyterian Church, and taught choirs and music classes at Westminster College and The Madeleine Choir School.