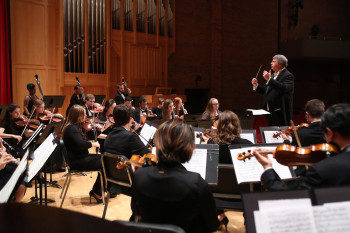 Named “Outstanding Professor of Music” three times at DePauw, Orcenith Smith also was the inaugural recipient of the Cassel Grubb University Professorship in Music from 1999 to 2003. He has conducted over 800 performances of orchestral, operatic, and choral/orchestral repertoire for which critical acclaim has come both here and abroad. The Chicago Tribune called Smith “a gifted conductor,” able to take an orchestra to “remarkable technical and artistic heights!” In Europe, critics cited his “brilliant achievement,” “perfect temperament,” his “sure technique” and that his “music-making was infectious!” He has led the DePauw Chamber Symphony in 120 domestic and international concert performances in Japan, Austria, The Czech Republic, the United Kingdom, France, Italy, Spain, the Southeastern, Northeast and Midwest United States, and in performances at The Kennedy Center’s Terrace Theatre and Carnegie Hall’s Weill Recital Hall.

While teaching at DePauw, he has held several other artistic posts simultaneously, including the music directorship of the Chicago Youth Symphony Orchestra, during which time that orchestra rose to national recognition being featured in articles in Musical America and Symphony magazine. In 1998, he was named American Artistic Director and to the jury of the Vienna International Youth and Music Festival (Jugend und Musik in Wien). He has conducted multiple performances of the Seattle Symphony, Oregon Symphony, Louisville Orchestra and with the Indianapolis Symphony Orchestra, including its New Music “Music in Mind,” Family and Discovery Concert Series, “Side-by-Side,” and the yearly Yuletide Celebration performances.

He has been the invited guest conductor for All-State High School Orchestras in Illinois, Indiana, Kansas, Oklahoma, Wisconsin, and British Columbia in Canada, and at the Interlochen Center for the Arts. He has conducted the West Berlin Radio Orchestra, the Guildhall Orchestra and the BBC Symphony (London) in international competitions and has also conducted the Dayton Philharmonic, the Lafayette Symphony, the Indianapolis Chamber Orchestra, the Springfield (OH) Symphony, the Carmel Symphony, and the Orange County (California) Philharmonic Society, many in education-oriented concerts.

The New York Times headline read, "One Who Dares to Reveal a Tuba’s Discreet Charms," when describing Orcenith Smith’s recital at Carnegie Hall’s Weill Recital Hall in October of 1997. National Public Radio’s Performance Today featured Smith on a live, nationally-broadcast solo recital performance from Washington, D.C. in January of 1998. Smith has recorded with Dave Brubeck, Sandi Patty, and on his own CD with DePauw faculty harpist, Harriet Thompson Moore. He has played with many symphony orchestras, including the major orchestras of Cincinnati and Indianapolis, and has been a soloist with orchestras in Oklahoma, Ohio, and Indiana.

Winner of several solo competitions, he has also received numerous awards and has composed solo and ensemble works for tuba. Smith received a Bachelor of Music degree in Instrumental Performance (Tuba) and Conducting (Honors Program) and a Master of Music degree in Instrumental Conducting from the University of Cincinnati College-Conservatory of Music. He has studied tuba with Samuel Green, Rex Conner, Albert Buswell and Harry Haines. He has been on the faculty of the DePauw School of Music since 1974.