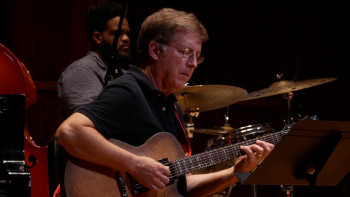 He has performed in the pit orchestra for a number of touring Broadway shows, including, The Lion King, Chicago, and Legally Blonde. As a studio musician his credits include The Rounder Records box-set (with Carrie Newcomer), jazz arranger John Clayton, John Mellencamp’s movie soundtrack Falling From Grace (with Larry Crane), Hal Leonard publications’ Essential Elements series, hundreds of jingles, and gospel singers Sandi Patti and Bill Gaither. He is the author of Live Sound For Guitar (pub. Cengage Learning) and technical editor for many of the Guitar for Dummies series. In November 2014, he performed four concerts in Guangzhou, China, with jazz pianist Steve Allee. He has been on the faculty of the DePauw School of Music since 1996.