HOW WILL YOUR MUSIC CHANGE THE WORLD FOR THE BETTER?

The DePauw University School of Music provides an excellent musical and intellectual foundation that prepares undergraduate musicians to be adaptive leaders, equipped to actively engage their communities and pursue a breadth of career paths.

We believe artists should embrace diversity, foster inclusivity, and raise cultural awareness, and this shapes our community and curriculum.

In partnership with DePauw’s College of Liberal Arts, we encourage students to integrate creative and practical musical skills with critical thinking and intellectual inquiry, empowering our graduates for a lifetime of learning. 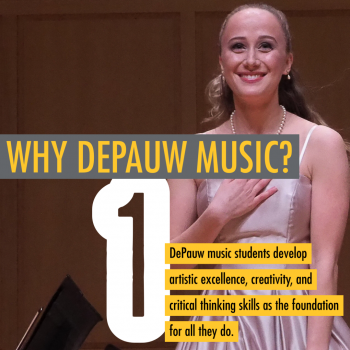 DEVELOP ARTISTIC EXCELLENCE, CREATIVITY, AND CRITICAL THINKING SKILLS AS THE FOUNDATION FOR ALL THEY DO.

Patricia Schuelke ('20) wrote and produced an original play, Somber and Wild, about Hector Berlioz, the romantic composer of Symphonie fantastique. Her play weaves together new dialogue with passages from Berlioz's memoirs to depict tragic and comic episodes from his somber and wild youth. It also features Schuelke's musical arrangements of works by Berlioz and his contemporaries. In honor of the 150th anniversary of the composer's death, and in collaboration with director Suzette Hartsfield ('20) and a cast and crew of DePauw students, they produced a fully staged performance of the play with live musical accompaniment at Music on the Square. (Spring 2019) 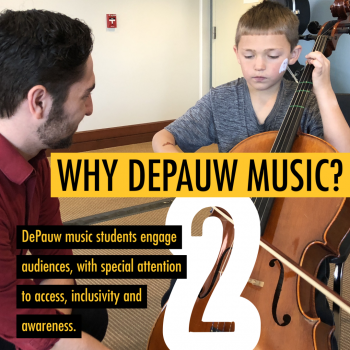 ENGAGE AUDIENCES, WITH SPECIAL ATTENTION TO ACCESS, INCLUSIVITY AND AWARENESS.

Music-Making for Incarcerated Communities designed and delivered a music therapy-informed vocal music-making curriculum at Putnamville Correctional Facility that promotes creativity as a source of stress relief within the carceral environment. After designing, implementing, and evaluating of the curriculum, students published their curriculum online as a template for other musical organizations interested in offering music-making opportunities to incarcerated people. (Spring 2019) 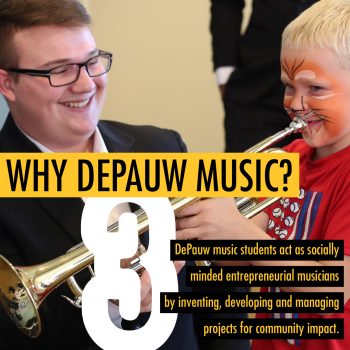 Notes on Tomorrow connected the Greencastle community with cancer patients at Riley’s Children’s Hospital. Through a benefit concert held at First Christian Church, we raised funds for the Isaiah Alonso Foundation and awareness of childhood cancer, while attendees enjoyed music and the opportunity to write notes of hope to the children at Riley’s. DePauw students then visited Riley's Children's Hospital, bringing music and delivering the notes of encouragement from the Greencastle community. (Spring 2019) 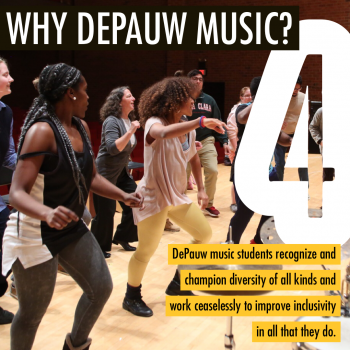 RECOGNIZE AND CHAMPION DIVERSITY OF ALL KINDS AND WORK CEASELESSLY TO IMPROVE INCLUSIVITY IN ALL THAT THEY DO.

Unwrapping Rap and Hip-Hop was designed to educate the DePauw Community about the history, production, and influence of a musical genre (Rap) and culture (Hip-Hop) that has become a cornerstone of American society. Rappers, songwriters, activists, scholars, and lovers of music engaged in panel discussions to deconstruct why Hip-Hop and Rap music are important in the modern day and how musical artists navigate the industry as entrepreneurs. The event featured performances by student rappers from DePauw University, giving people an understanding of how Rap and Hip-Hop influence communities around the world. (Spring 2019) 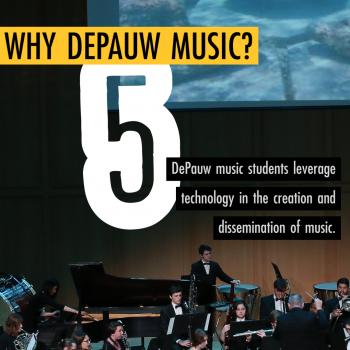 LEVERAGE TECHNOLOGY IN THE CREATION AND DISSEMINATION OF MUSIC.