[DOWNLOAD AUDIO: "The State of the Economy" 288KB] "Obviously it's got a little strength now," former Federal Reserve Chairman Paul A. Volcker says of the nation's economy. "I think it may have a little momentum to continue. But I think underlying -- and I can't make a short-term forecast -- this country has some pretty serious imbalances that are going to have to be addressed sooner or later, and they're not being addressed right now." Volcker, who served as Fed chair from 1979 to 1987 under Presidents Carter and Reagan, was on the DePauw University campus today to deliver a Timothy and Sharon Ubben Lecture, which was co-sponsored by DePauw's Management Fellows program.

[DOWNLOAD AUDIO: "Consumption Prone" 1000KB] "We are very consumption prone," Volcker continued. "We are the world champion consumers. The corollary is, we're the world's worst savers. And we are utterly dependent, aggravated by the big budget deficit, on the savings of foreigners. We're dependent upon the largesse of strangers, as Blanche DuBois put it in A Streetcar Named Desire. So far it's worked out, but it's not gonna work out forever. We cannot run an external deficit of 6% of the GNP (gross national product), which I guess it's rising to, and an internal budget deficit of 5% of the GNP-- and it's no coincidence that they're more or less alike, because they're mutually dependent -- indefinitely. Something's gonna happen. We're gonna have an adjustment. The question is whether its an orderly adjustment or a disorderly adjustment. They tend to be disorderly if you haven't anticipated the adjustment, and we're not doing any anticipating right now in our fiscal or other policies."

Paul Volcker, who is credited with ending the spiral of inflation in the 1980's, spoke in Moore Theatre of the Performing Arts Center on corporate responsibility in the wake of recent scandals at a spate of American corporations, including Enron, Worldcom and Arthur Andersen.

Volcker says companies and their accounting firms often conspired to "fix the books" and make financial reports seem rosier than they were in reality. Accounting firms, he says, were hired by the companies and were supposed to report to investors, but in many cases did not. In addition to auditing the books, accounting firms were consulting the firms, and this "double-dipping" created a "conflicted" situation, according to Volcker, where, the better the financial picture, the stronger the relationship between the accounting firm and its client would become.

Volcker says standards that have been put in place since the scandals ensure more accountability and oversight of accounting practices.

[DOWNLOAD AUDIO: "Unfortunate But Necessary" 347KB] "And its unfortunate that we have to have that kind of legislation for an honored profession, but I don't think there's any question that it was necessary. The profession had failed in repeated efforts in the past to reform themselves... finally the problem had become great enough so it was taken out of their hands."

But when it comes to corporate self-governance, Volcker says challenges remain. Too many people who are elected to boards of directors are "too cozy" with the company's CEOs, who often select candidates for the board, says Volcker. CEOs have the job of managing and directing a company, while a board's role should be to oversee the operations.

[DOWNLOAD AUDIO: "Oversight" 197KB] "And I think most boards of directors have lost sight of the importance of that oversight function and the need to maintain a kind of skeptical eye, even while they were generally supportive of management." Volcker hopes corporations, and their investors, lobby for change in that area.

[DOWNLOAD AUDIO: "Executive Compensation" 355KB] "How did this compensation ever get up to the egregious levels that it has? How did it get to the point where in a number of cases the chief executive has left or gotten fired in a failing company and walked off with $100 million or more? I mean, how can that happen in any rational compensation system?"

Answering his own question, Volcker says the problem is the fat stock option packages that many CEOs were granted in the 1990s. Options,

[DOWNLOAD AUDIO: "Stock Options" 502KB] "make you very short-term conscious. What you're worried about is the price of that stock when your option vests... 'how can I tweak the results to improve the stock price and beat the analyst's expectation?' And what a temptation that gave to jiggling the books. So if there's any reform in compensation, it should be a reduced use of stock options." 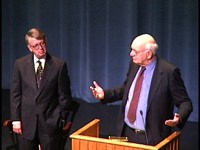 Appointed by President Jimmy Carter in 1979 as chairman of the Board of Governors of the Federal Reserve System, a role he served in until 1987 (he was reappointed by President Ronald Reagan in 1983), Paul Volcker was a major architect of America's financial and economic policy. Volcker, who appeared on the cover of TIME magazine 24 years ago (October 22, 1979), is largely credited with putting an end to runaway inflation and laying the foundation for the extended prosperity of the past two decades.

[DOWNLOAD AUDIO: "Healthy Changes" 89KB] "I think we are seeing some healthy changes, and I think we're gonna be better for it," Volcker told his DePauw audience as he finished his speech. "I suspect many of you will end up in business and that these are useful lessons for you...

[DOWNLOAD AUDIO: "Making a Difference" 382KB] We ought to clean up our act. It's important for us, it's important for the world. If we want our business system of free enterprise, democratic capitalism to be the model for the world, we'd better live up to what we preach... I think we are making some progress and I hope that you will be a part of it when you get out into the business world."