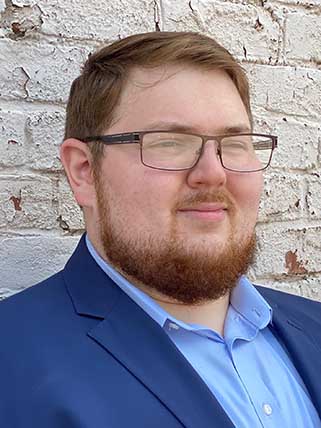 What is your favorite performance story?

While invading a church during "Sister Act!: The Musical," I was supposed to be hit by a hymnal and fall into a wheelchair to be wheeled offstage. The hymnal was tossed my way but hit the person who was wheeling the chair rather than me. So he thought he should fall forward and push the chair into me to give me a reason to fall back, I didn't know this, so I tried to saunter off defeated only to get hit in the side of the legs with a wheelchair and fall the wrong direction towards the audience.

Jonathan D. Kroeger is a composer, singer, designer, and programmer who works on a variety of projects across different fields. Most recently, he has taken on the part-time position as “Media Coordinator” for the DePauw University School of Music. In his time working for DePauw, he has led the charge on a website redesign, created concert programs for multiple guests artists, created and distributed publicity through multiple media outlets, and migrated a 500+ item database to new software allowing them to streamline rentals and returns.

As a composer, he has studied under Dr. Eliza Brown as well as Gabrielle Proy. He focuses on dramatic works, specializing in opera and musical theatre. His most recent project was a collaboration with mezzo-soprano Katie Dobbs and pianist Amanda Hopson to realize the finale aria of an opera-in-progress. He has also collaborated with Arcomusical to create a sonata for berimbau and piano. He is currently attending Bowling Green State University to pursue a Masters of Music in Composition as well as a Masters of Business Administration.

His design endeavors include websites, publicity materials, as well as exclusively artistic projects that often combine various styles together. He has worked extensively with Adobe Illustrator, Photoshop, and InDesign.

When programming, Jonathan works primarily with python to create various artistic projects and task-automation. His current project is a program that takes audio input and visualizes it as a spectrum allowing one to see the individual ups and downs of the vibrations they create.