DePauw University senior Maria T. Haag emerged as the winner of an undergraduate research competition which took place this week at Experimental Biology (EB) 2013, an annual conference for biologists in Boston. Haag's research on heart regeneration in goldfish, conducted under the guidance of Pascal Lafontant, associate professor of biology at DePauw, won the Undergraduate Student Poster Presentation Award, presented by the American Association of Anatomists (AAA) and the Advisory Committee of Young Anatomists (ACYA).

Another DePauw senior, Adedoyin Johnson, was a finalist in the competition. They were two of 12 students from North America invited to present and defend their research at the conference.

"I’m working on this lab with Dr. Lafontant, but it’s my project. I’m the one who presents it," Haag told The DePauw. A biology and political science double major and Science 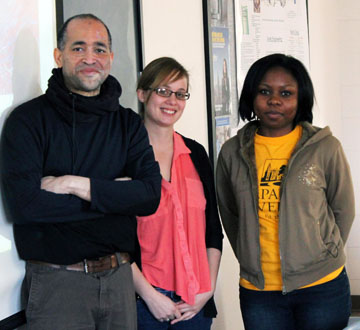 Research Fellow, Haag says, "When you go to a larger research institution you’re just helping out a grad student: you don’t experience that same ownership of a project." (photo, l-r: Prof. Lafontant with Haag and Johnson)