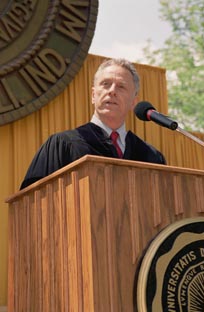 [DOWNLOAD AUDIO: "Greatest Generation" 97KB] "Tom Brokaw in his best-selling book, The Greatest Generation, told our story. Your story has yet to be told," Morris Dees said to DePauw University's Class of 2001, as he delivered the commencement address today. "When the story is told of your generation, it'll be told not in our gross national product, but in our gross national consciousness," he stated.

Dees, chief trial counsel and co-founder of the Southern Poverty Law Center, has dedicated his life to battling extremist groups. He told a standing room only crowd assembled on East College lawn that his generation had a number of leaders who worked to bring people closer together, citing Gloria Steinem, John F. Kennedy and Richard Nixon. But Dees says the greatest hero of his generation was Dr. Martin Luther King, Junior.

justice that Dr. King led is where you can pick up and move on," he told the young graduates. Dees says since Dr. King's assassination, America has taken "three steps up, and two back," and that gaps in racial, economic and political equality remain.

[DOWNLOAD AUDIO: "The Keys" 217KB] "You have the keys to the gates of justice," Dees continued. "It's okay that we earn money, and get jobs and build up our retirement plans and have homes and save money for our families do all the things that come to those who work hard. But we cannot forget the least among us," he continued.

The author of the books Hate on Trial: The Case Against America's Most Dangerous Neo-Nazi, A Season For Justice, and Gathering Storm: America's Militia Threat summed up his speech by telling the 533 graduates, their parents, faculty, staff and many friends gathered in the shadows of DePauw's most historic structure, East College, 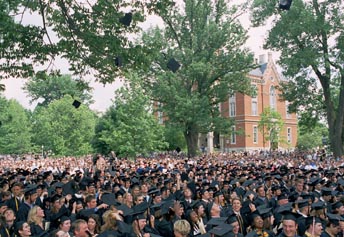 Dees also received an honorary Doctor of Laws degree from DePauw. Other honorary degree recipients were Karen Koning AbuZayd, deputy commissioner-general of the United Nations Relief and Works Agency, and a 1963 graduate of DePauw (Doctor of Public Service). Robert R. Frederick, former president and chief executive officer of RCA Corporation, a 1948 DePauw graduate and a Life Trustee of the University; and Dr. Allan R. Millett, The Raymond E. Mason, Jr. Professor of Military History at Ohio State University and president of the U.S. Commission of Military History (DePauw 1959) were both awarded Doctor of Letters degrees.

For more coverage of Commencement 2001, click here and here.