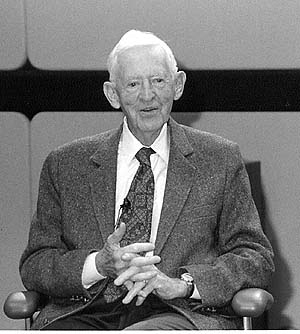 July 31, 2001, Greencastle, Ind. - "The last of a breed of newsmen." That's how one colleague remembers Phillip H. Ault, a 1935 DePauw University graduate who died July 2. A member of the Indiana Journalism Hall of Fame, Ault was 87 years old.

After graduating from DePauw, Phil Ault took a job with a newspaper in suburban Chicago. During World War II, Ault traveled to Iceland, Algeria, Tunisia and England as a war correspondent for United Press, sometimes working alongside Ernie Pyle. When Ault was inducted into the Hall of Fame in 1998 he recalled being on hand in 1942, when General George S. Patton and the Allied troops arrived on the shores of North Africa. Ault said he waded ashore "carrying my portable typewriter above my head, a correspondent's only weapon."

Walter Agee, dean emeritus of journalism at the University of Georgia, calls Ault "one of the top journalists of the 20th century," in an article in the July 15 Arizona Republic. You can access the article by clicking here: (a fee is charged for accessing the Republic's archives)

Also quoted is Dennis Wilcox, director of the School of Journalism and Mass Communications at San Jose State University, who made the "last of a breed" reference. "He represents another era of journalism that was more ethical, had higher standards," Wilcox said. "He was also a very courtly gentleman."

Phil Ault was scheduled to become the first recipient of DePauw's Distinguished Alumni Achievement Award this fall. His family is requesting that memorials be made to a scholarship fund in his name at DePauw.