November 13, 2001, Greencastle, Ind. - "Where can you expect to get the most for your money?," U.S. News and World Report asks in a special report, titled "Paying for College." The magazine's editors rank DePauw University as the second best value in the nation among liberal arts colleges (Amherst College tops the list).

U.S. News uses "a formula that relates a school's academic quality with the net cost of attendance for a student who receives the average level of 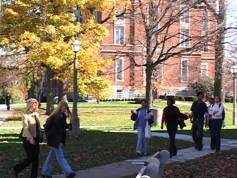 financial aid. The higher the quality and the lower the cost, the better the deal," the magazine states.

U.S. News and World Report ranks DePauw as a top-tier national liberal arts school for a second straight year, and the University's overall score improved by almost 10%, with strong gains in its academic reputation score, its graduation and retention

rate, faculty resources and its efforts to keep class sizes small. You can read more about that by clicking here.

The Princeton Review's 2002 edition of The Best 331 Colleges ranks DePauw's professors, social environment, radio station and spiritual environment as among the best in the nation. You can read more about that by clicking here.