November 29, 2001, Greencastle, Ind. - An idea that 1969 DePauw graduate Mark B. Vittert had during his college days that he thought might be worth a million dollars is the subject of a humorous column written by Vittert and published in the latest edition of the St. Louis Business Journal. Printed on the opinion page, the piece is entitled, "A million-dollar idea (almost)."

"I was coming home for Christmas vacation back in 1968. DePauw University is a wonderful school about a 3 1/2-hour drive back to St. Louis," Vittert writes. For 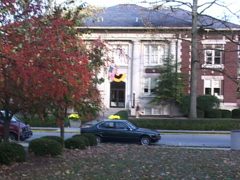 It's at a holiday party that the DePauw student came up with his 'million dollar idea.' We're not going to give it away, but will only say it did involve Switzer's licorice, and that Vittert eventually pitched his concept to the head of the candy company.

You can read the entire tale, in Mark Vittert's own words, at the St. Louis Business Journal's Web page by clicking here.