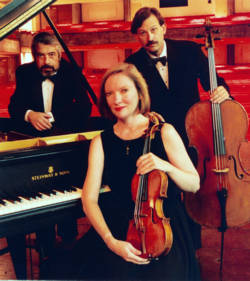 Joined by Strauss, the Trio will perform the delightful Mozart Quartet, K493. Following intermission, Carney, Grubb and Cymerman will present the famous and beloved Trio I, op. 8, by Johannes Brahms.

Now in its 10th year, Trio Concorde plays yearly at DePauw. Although they are far apart geographically, the members of the trio enjoy performing together and do so as often as their schedules allow. “Our schedules permit only limited rehearsal time, so it is always a challenge and thrill to see how much we can accomplish when we perform, and such a pleasure to play together,” Cymerman said.

Laurie Carney, violin, is a founding member of the renowned American String Quartet, which presents more than 80 concerts annually. The Quartet recently celebrated its 25th year by playing in every state. They perform worldwide, including recent engagements in Berlin, London, Los Angeles, New York, Paris, Rome and Zurich. Carney is a professor of Violin at the Manhattan School of Music and in demand at master classes across the country. She studied with Dorothy DeLay and received her bachelor's and master's of music degrees from Juilliard. She performs on a violin made by Carlo Tononi (Venice, 1763).

William Grubb, cello, made his solo debut with the Indianapolis Symphony Orchestra at age 17. Grubb is a professor of cello and chamber music at Butler University and the University of Cincinnati College-Conservatory. He performs with the American Chamber Ensemble and the New York Chamber Soloists, and he appears in chamber concerts and recitals worldwide. His teachers include his father, Cassel Grubb, former director of DePauw's School of Music, Fritz Maag and Ronald Leonard. He received his bachelor's and master's of music degrees, as well as his Doctor of Musical Arts degree, from Juilliard. As husband and wife, Grubb and Carney perform together regularly.

A native of France, Claude Cymerman, piano, graduated from the Conservatoire National Supérieur de Musique in Paris with highest honors, studying with Pierre Sancan. He is the Siegesmund Professor of Music at DePauw, where he teaches piano, chamber music and a multi-media course on Richard Wagner's "Ring Cycle." After winning national and international competitions, including Grand Prize at the Marguerite Long-Jacques Thibaud contest, he studied at Indiana University with Gyorgy Sebok. He was recognized as Outstanding Pianist by the late French President Georges Pompidou. In 1982 he portrayed the composer Johannes Brahms on French National Television. Due to take a sabbatical leave from DePauw in 2002-03, Cymerman will venture into the jazz and avant-garde repertoire, working on a set of 36 variations based on a Chilean revolutionary song by Frederic Rzewsky, and two solo piano improvisations based on the contemporary works of Clare Fisher and Bill Dobbins. These works will be performed following the sabbatical.

Michael Isaac Strauss, viola, is the principal violist of the Indianapolis Symphony Orchestra. Strauss performs and appears at festivals worldwide. He has appeared in radio and television

broadcasts, recorded solo CDs, and his most recent recordings are the complete viola quintets by Mozart with the Fine Arts Quartet, which are to be released this year. Strauss has served on college faculties, and he is a graduate of the Curtis Institute of Music. He performs on a 1704 viola made by Matteo Albani (Bolzano, Italy).

Trio Concorde will present the same recital at Butler University on Wednesday, March 20, at 7:30 p.m. This concert is also free and open to the public.