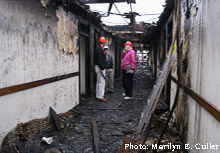 May 17, 2002, Greencastle, Ind. - "Southport Middle School [in Indianapolis] students from Denise Musick's sixth-grade essential skills class recently donated more than 100 "goodie bags" to DePauw University students who were evacuated from their dorm after a fire destroyed many of their belongings April 7," the Indianapolis Star reports. "The fire gutted the entire fourth floor of the building and caused severe water and smoke damage to the rest of the structure, which was built in 1917."

The article continues, "The idea behind the Service Learning Project was to encourage the DePauw students during the week of their final exams."

You can access it online at the Star's web site by clicking here.

The April 7 fire at Rector Hall forced the evacuation of 116 students, who all exited the building safely. DePauw plans to rebuild and renovate the dormitory in time for a reopening in early 2003 (read more here).