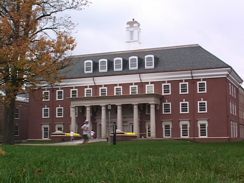 June 24, 2002, Greencastle, Ind. - For the third time this month, the Indianapolis Star has profiled a high school valedictorian who will be attending DePauw University in the fall. The June 22nd edition of the paper features an article on Aleka McAdams, valedictorian of the senior class at Morristown (Indiana) High School. It notes that McAdams, a National Merit Scholar, "has acquired a mature understanding of the process of looking into the future."

The senior tells the Star, "If I've learned anything in the past 18 years, I've learned that plans change." The newspaper notes that "McAdams plans to work in pharmaceutical research and development. She will attend DePauw University to major in biology and possibly obtain a second major in chemistry. She also plans to attend graduate school."

Aleka McAdams was active in her high school, serving as president of the National Honor Society and as a member of 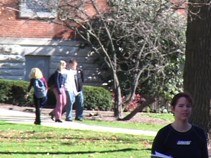 the French Club, Drama Club and band. She also participated on the FIRST Robotics team, Spell Bowl team and Academic Super Bowl team. This summer, she spent a week and a half in Corona, New Mexico "with a youth group on a mission to restore two churches that had fallen into disrepair."

You can read the story in its entirety at the paper's Web site by clicking here. Access previous Star stories about Katie Billman of Speedway High School here, and Andrew Arthur Millis of Center Grove High School here.