Novel by Emeritus Prof. Felix Goodson Captures the New Mexico of His Youth

Dr. Goodson, who grew up in New Mexico's Cimarron Valley in the 1930's, tells Greencastle's Banner-Graphic, "I remember these crazy people and these wild times. The Cimarron was legendary as a place. I just happen to have been brought up there."

A feature article on the book in the newspaper says that O' Cimarron! tells the story of a 7-year-old boy "and his adventures as he weathers snow storms, dust storms, drought, a first love, and rites of passage. While Goodson says he changed the names of his characters, many of them are based on real people."

A prisoner of war in World War II, the paper notes that Felix Goodson, who retired from DePauw in 1990, "still enjoys flying his small private plane. And he has a wrecked plane in his barn that he is rebuilding as a project." He also raises cattle on his Putnam County farm. The Banner-Graphic's Lisa Meyer 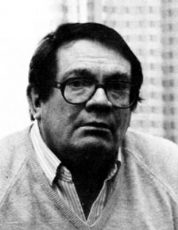 Trigg notes, "Most recently, Goodson has completed the 'work of his life' -- the textbook The Evolution and Function of Cognition. He has spent 15 years on the textbook and calls it 'the culmination of my best thinking, such as it is. I hope it is a major contribution, and my publishers think it will be.' "

You can read the newspaper article in its entirety by clicking here.

The publisher's Web page on O' Cimarron! is accessible here.