October 2, 2002, Greencastle, Ind. - "This is therapeutic for me because I'm giving back," 1998 DePauw University graduate Theresa Campbell tells the Chicago Tribune, in an uplifting article published today. "I like helping people reach those goals." Campbell, a paraplegic who was born with a rare form of spina bifida, works as a life-planning coordinator and peer instructor at Schwab Rehabilitation Hospital on Chicago's west side, helping those who've been injured in accidents, suffered strokes, and been victims of violence, overcome their disabilities. The story, by Maria Kantzavelos, is entitled "Wheelchair helps teacher relate to students: She enables others to reach their goals," and mentions Campbell's DePauw experience.

Theresa Campbell "attended a Chicago public elementary school for children with special needs," writes Kantzavelos. But after graduating from 8th grade, Campbell insisted on attending her local public high school, Percy L. Julian [named for the legendary chemist and 1920 DePauw graduate], on the city's South Side, and on being mainstreamed with the student body. In high school, Campbell was active in extracurricular activities and clubs and served as president of the school's National Honor Society. She graduated salutatorian in 1994, 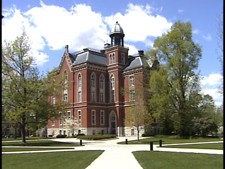 and when it came time for college, some people weren't expecting her to attend a school away from home. Driven by a longing for independence, Campbell became the first student to attend classes in a wheelchair at DePauw University, a small liberal arts college in Greencastle, Indiana."

The story continues, "Graduating from college within four years is perhaps one of her greatest accomplishments-- considering that her studies were interrupted during her last three years by hospitalizations and treatments for illnesses related to pressure ulcers and other medical complications, forcing her to withdraw from school during her sophomore and junior year. But Campbell was determined to graduate with her class, becoming the first member of her family to earn a bachelor's degree. Even before she earned her degree in English, she received job offers. She had interviewed for positions with insurance companies and brokerage firms. When the position opened at Schwab, Campbell knew where she needed to be.

Theresa Campbell tells the Tribune that she has just moved into her own apartment, plans a skydiving trip and recently completed a climb of a 100-foot rock. Campbell lost the ability to walk when she was a little girl.

"I used to always question God and ask why. Now there's not a question in my mind. This is why. Just talking to people, encouraging them, inspiring them. I believe that's what I'm here to do-- to lighten the load."

One of Campbell's students, Melvin Wynn, is a former drug dealer who was partially paralyzed in a shooting and now has his sights on college and becoming a drug abuse counselor. Wynn tells the newspaper, "She's for real. She won't tell you what you want to hear, she'll tell you what you need to hear. She knows exactly what it takes to be successful. And she keeps you well grounded; she'll tell you if you're shooting at the moon with a slingshot."

The lengthy article is available in its entirety at the newspaper's Web site by clicking here (free for 7 days, registration required).