June 18, 2003, Greencastle, Ind. - "Rand McNally & Co., the Skokie-based mapmaker, has named former Allstate Corp. executive Robert S. Apatoff as its new president and CEO," reports Crain's Chicago Business of the 1980 DePauw University graduate. The story adds, "He is taking the reins at Rand McNally as it seeks to become more competitive with online mapping companies like MapQuest, a unit of AOL Time Warner Inc. Rand McNally emerged from Chapter 11 in April, less than two months after filing a prepackaged bankruptcy plan that has cut some $250 million in debt."

"I look forward to solidifying and building our core business while exploring new, innovative ways to leverage and grow the brand," Apatoff said in a statement released by the company today. Apatoff previously served as senior vice president and chief marketing officer at Allstate. Prior to that, he was vice president of corporate marketing/communications for Aetna U.S. Healthcare Inc., and held senior marketing positions at Anheuser-Busch and Reebok International, Ltd. where he helped craft the introduction of innovative, integrated marketing programs such as the "Bud Bowl" and the "Reebok Pump."

Peter Nolan, chairman of the board of Rand McNally and managing partner at Leonard Green & Partners, a private equity firm that owns a majority interest of Rand McNally, said, "Rob Apatoff brings a rich background of solid business achievements with several of America's best-known companies. He is a proven 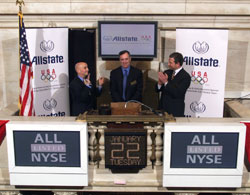 innovator and leader who can identify new opportunities and take the company to new dimensions. We are thrilled to have Rob leading the organization."

You can access the story at Crain's by clicking here. You'll find a news release at Business Wire here.