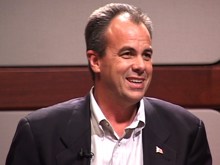 August 15, 2003, Greencastle, Ind. - "After months of development work testing various program concepts, Jesse and I have agreed that this is the best venue for his unconventional approach to politics and television," says MSNBC President Erik Sorenson (DePauw 1977) of the decision to run a new show by Jesse Ventura on Saturday nights, and not each weeknight as previously planned. Ventura, the former professional wrestler, will present the broadcast from Minnesota, which he served as governor from 1998-2002.

Sorenson tells the Associated Press, "There's some really good things about being in Minnesota. The heartland is greatly underrepresented by American television. On the other hand, just geographically -- this is not a knock on St. Paul or Minneapolis -- but geographically, it is so far from where a lot of the newsmakers live and work and operate."

The AP notes, "On television, Saturday is generally the least-watched day of the week. But Sorenson said for cable, it's a big night for people who don't have time during the week to watch." For his part, Ventura says the Saturday time slot "is not as confining as weeknight programming and will allow me more

freedom to strut my stuff and make my case."

You can read the story at CNN.com by clicking here.

Erik Sorenson is a member of DePauw's Media Center board and returned to campus last October to take part in a discussion of the news business. You can read about it by clicking here.