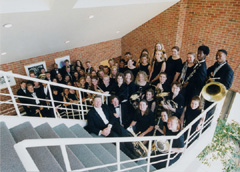 October 2, 2003, Greencastle, Ind. - The DePauw University Band will perform its first concert of the 2003-04 season on Sunday, October 5 at 1 p.m in Kresge Auditorium of the Performing Arts Center. The free concert will feature Anthony Iannaccone's After a Gentle Rain, Frank Ticheli's An American Elegy, and David Holsinger's To Tame the Perilous Skies, among other works. The University Band is composed of musicians from both the DePauw School of Music and the College of Liberal Arts. In addition to their concerts on campus this year, the Band will perform at high schools in the Indianapolis area, and will record its fifth compact disc in May. (Band photo by Marilyn E. Culler)

The second piece in the program, An American Elegy, evolved from a special project sponsored by the Alpha Iota Chapter of Kappa Kappa Psi at the University of Colorado on behalf of the Columbine High School Band. According to the composer, Frank Ticheli, the work was “composed in memory of those who lost their lives at Columbine High School on April 20, 1999,” and was meant to honor those who survived the tragedy. He describes the work as “an expression of hope... offered as a tribute to their great strength and courage in the face of terrible tragedy. I hope the work can serve

as one reminder of how fragile and precious life is and how intimately connected we all are as human beings.”

Another featured work, After A Gentle Rain, has a more lighthearted tone. The piece was composed in 1981 by Anthony Iannaccone, and features gentle, rippling sounds, suggestive of light reflecting off of foliage. The introverted mood of this thoughtful, Impressionistic work is presented in a quiet, meditative context.