October 20, 2003, Greencastle, Ind. - The Mississippi Freedom Democratic Party (FDP) "was one of the most important and distinctive institutions to emerge from the civil rights movement. It challenged white supremacy in the most repressive state in the South, combining grassroots activism with a radical social agenda," writes John Dittmer, emeritus professor of history at DePauw University, in the fall issue of Yes!: A Journal of Positive Futures. "The immediate goal of the Freedom Democratic Party was to enroll thousands of members in preparation for its challenge to the formal Democratic Party," writes Dittmer in an article entitled "Fighting for the Soul of the Democratic Party."

"The 1964 Democratic National Convention was a turning point in the civil rights movement," Dr. Dittmer continues. "When they reached Atlantic City, the 68 members of the Freedom Democratic Party delegation fanned out over the convention floor, imploring delegates to seat the FDP rather than the racially exclusive Mississippi delegation. The high point came when Fannie Lou Hamer, the former sharecropper who was one of the founders and leaders of the FDP, testified before the credentials committee and a national television audience. After describing her brutal beating at the hands of police officers in the 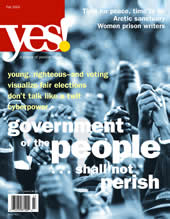 Mississippi Delta town of Winona, Mrs. Hamer concluded dramatically: 'If the Freedom Party is not seated now, I question America.' This high drama did not go unnoticed in the White House. President Lyndon Johnson feared that if the FDP were seated, he would lose the South and the election. The president hurriedly called a press conference to get Mrs. Hamer off the air. The networks, however, played back her testimony in prime time that night, and telegrams flooded Atlantic City in support of FDP."

It continues, "In response to the pressure raised by FDP and its supporters, Democratic Party leaders proposed a compromise in which FDP representatives Aaron Henry and Ed King would be given two seats at large on the convention floor, while the remaining FDP delegates would be 'welcomed as honored guests of the convention.' The national party also promised to eliminate racial discrimination in state delegations in all future conventions... If the Freedom Democrats and their allies did not achieve all their goals during the movement years, they did bring about extraordinary changes in a state that had been locked up in the caste system. They transformed Mississippi, opening up the political process to African Americans."

Yes! is published by the Positive Futures Network (PFN), an independent, nonprofit organization dedicated to supporting people's active engagement in creating a just, sustainable, and compassionate world. You can access the article in its entirety by clicking here.

An acclaimed civil rights historian, John Dittmer joined the DePauw University faculty in 1985. He was the recipient of the 1999 Exemplary Teaching Award from the General Board of Higher Education Ministry of the United Methodist Church.

His book, Local People: The Struggle for Civil Rights in Mississippi, was published in 1994 and received the prestigious Herbert G. Gutman Award, the Lillian Smith Book Award, the McLemore Prize from the Mississippi Historical Society and the Bancroft Prize. The New York Times named Dittmer's book one of the “Notable Books of 1994.” Julian Bond called Local People "the definitive analytical history of the black freedom movement in the nation's most recalcitrant state."