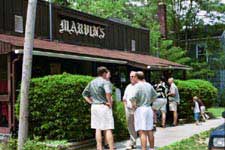 February 26, 2004, Greencastle, Ind. - If you're a fan of the CBS drama Joan of Arcadia and were paying close attention to last Friday's episode, you heard a reference to a DePauw University institution. Greencastle resident Dick Funk did. He says, during an exchange between two characters, a male and female, "She asked him where would be a good place to go for supper, and the brother says, 'Marvin's ... they have the best garlic cheeseburgers in the area' or words to that effect. Anyway, that kind of rang a bell." Funk contacted Greencastle's Banner-Graphic, which traced the reference to Tom Garrigus, a 1988 DePauw University graduate who wrote the episode and is producer of the series.

A CBS publicist told the newspaper, "The show, of course, is not set in Indiana, but he went to DePauw and used to frequent Marvin's. It was his way of making a nice reference to a place he used to enjoy." She also gave the Banner-Graphic Garrigus' direct phone number.

Eric Bernsee writes, "Garrigus admitted that it was his first TV script reference to his Indiana/DePauw/Marvin's roots. 'It just lent itself to the episode,' he explained, alluding to a show that also includes dialogue on the healthful benefits of garlic. His brother, a 1983 DPU graduate, picked up on the reference right away, he said, but until the call from Greencastle, that was it. 'None of my other DePauw alumni friends from across the country called or e-mailed me about it,' Garrigus said, 'so I guess they didn't pick up on it.'

Garrigus, who has also written episodes of ER, The Education of Max Bickford and Party of Five, adds, "Marvin's was the place to be on campus. It's always meant good memories. It's part of the fabric of being a DePauw University student." Bernsee notes, "And although Garrigus may have eaten there religiously as a student, the TV writer wouldn't recognize the place now. Kevin and Mike Sullivan razed the old college haunt last winter and built a new Marvin's alongside the old site at College Avenue and Poplar Street. And although the ambience is different, the food is still the stuff of which alumni legends are born [photos accompanying this story show the 'old' Marvin's]. To some of them, of course, a garlic cheeseburger and cheese fries is a religious experience. Count Garrigus a believer.

'Stop by and have a GCB for me,' he concluded."

You can access the story in its entirety at the newspaper's Web site by clicking here.