February 27, 2004, Greencastle, Ind. - "Like 39 other states, Indiana already has a law that says explicitly that marriage is between a man and a woman. This parallels the federal Defense of Marriage Act, signed in 1996 by President Bill Clinton," writes Ken Bode, Eugene S. Pulliam Distinguished Professor of Journalism at DePauw University, in today's Indianapolis Star. With Indiana in the midst of a historic budget crisis and with dozens of bills in limbo, Bode wonders why state legislators are focused on the issue of gay marriages.

"What has spooked the Hoosier lawmakers? Are they afraid that our state Supreme Court will follow the example of the Massachusetts jurists and declare gay marriages legal here? Of the seven Bay State justices who ruled that gays must be allowed to marry, six were appointed by Republican governors. No one has any notion that could happen here... This is an effort to interject a wedge issue into the politics of 2004," he writes in an op-ed.

Later, Bode states, "The move toward civil unions and gay marriages opens another front in the culture war. For one side, it is a biblical proscription, an effort to rewrite the ancient laws of mankind. For the other, it is utterly secular,

a move to find privacy and equal protection rights in the U.S. Constitution. Each side cares deeply, I concede that, and there is little middle ground for compromise."

The former chief political analyst for CNN notes, "A day after President Bush extended his hand to social conservatives by endorsing a constitutional amendment to ban gay marriages, Federal Reserve Chairman Alan Greenspan waned that the federal deficit is so out of control that we may need to cut both Social Security benefits and Medicare. That issue will be buried in the upcoming barrage of battles over gay marriage, just as the really pressing Indiana problems are ignored in the goofy legislative antics at the Statehouse. This is just plum dumb politics. 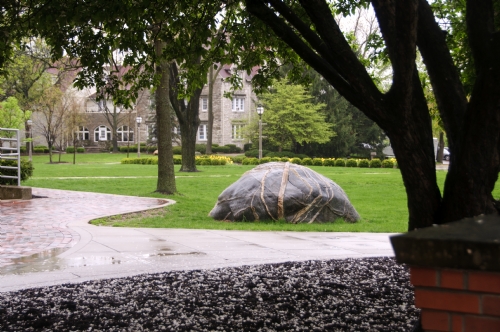 Gov. Joe Kernan and Mitch Daniels are preparing to face off in what could be a serious and sensible debate over the future of our state. Let's not allow them to be dragged into a needless culture war over gay marriages."

You can access the column in its entirety by clicking here.