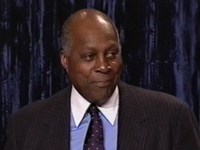 June 28, 2004, Greencastle, Ind. - The John Kerry for President campaign has named Vernon E. Jordan Jr., senior managing director of Lazard LLC and a 1957 graduate of DePauw University, to be Senator Kerry's lead debate negotiator. A story distributed by US Newswire states, "With a series of Presidential debates proposed for this fall, Jordan ... will play a key role in Kerry's campaign to build an America that is stronger at home and respected abroad." Kerry is quoted as saying, "I'm honored to have Vernon Jordan leading my debate negotiation efforts. Vernon is an outstanding Democrat but more importantly, someone who has lived his life striving to expand opportunity and make the American Dream a reality for Americans from all walks of life."

Jordan, a former adviser to Presidents Clinton and Carter, says, "Tapping into America's optimistic spirit, Senator Kerry has developed a comprehensive plan to strengthen our nation and help families get ahead.

I'm honored to join his campaign and look forward to this fall's debates -- where the American people will see the clear choice facing them in November between more of the failed Bush record and John Kerry's optimistic plan to build a stronger America." Read more by clicking here.

Meanwhile, Mr. Jordan has been elected president of the Economic Club of Washington. A Dow Jones Newswire story notes, "He succeeds former Senate Majority Leader George Mitchell, D-Maine, who served as the club's president from 1998 until 2004. The Economic Club of Washington was created in 1986 to provide a forum for business and government leaders to express their views on key economic issues and how those issues affect the region, the nation, and the global economy."

The item continues, "Jordan's previous posts include president and chief executive of the

National Urban League, executive director of the United Negro College Fund, director of the Voter Education Project of the Southern Regional Counsel, and Georgia Field Director of the NAACP. He is a graduate of DePauw University and Howard University Law School." Read a recent Washington Post story on the Economic Club, which mentions Jordan's election, here.