July 27, 2004, Greencastle, Ind. - Five staff members of DePauw's student-run radio station, WGRE, are finalists for national "Mark of Excellence" awards from the Society of Professional Journalists (SPJ). Undergraduate students from across America submitted more than 3,200 entries in the Mark of Excellence contest. The national finalists' entries represent the work of top student journalists from across the country. These finalists have already received recognition at the regional level. Winners will be announced and all finalists will be recognized at the SPJ's national convention in New York City on Saturday, September 11. 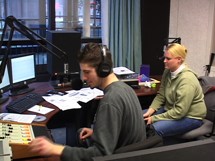 In the regional "Mark of Excellence" competition (including the aforementioned entries which moved on to the national level), DePauw student journalists received seven first-place awards, one second-place prize, and one third. Read more by clicking here.

The Society of Professional Journalists works to improve and protect journalism.

SPJ is dedicated to encouraging the free practice of journalism and stimulating high standards of ethical behavior. Founded at DePauw in 1909 as Sigma Delta Chi, SPJ promotes the free flow of information vital to a well-informed public, works to inspire and educate the next generation of journalists, and protects First Amendment guarantees of freedom of speech and press.

Read the list of national finalists by clicking here. Results of the regional awards can be accessed here.