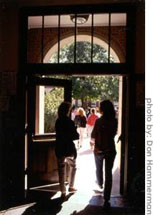 August 17, 2004, Greencastle, Ind. - Today's Indianapolis Star carries the announcement that was made yesterday on this site, that the Genesis Group "has chosen DePauw University as one of two test sites for its Program For Change. At DePauw and the University of Kentucky, the Genesis Group will work with student leaders and administrators to develop and implement a long-term program to change attitudes toward student alcohol use on campus," the newspaper notes.

The Genesis Group is a coalition of 46 national and international fraternities and sororities formed to combat binge drinking among college students. It's co-chair is Norval Stephens, chair of the Delta Tau Delta Educational Foundation, a 1951 graduate of DePauw and a life member of the University's Board of Trustees. The item in the Star states, "The program includes a student code of conduct, a campus coalition for change, attitude change programming, security enhancements and campus health services. Officials expect to draft a five-year plan aimed at reducing high-risk alcohol use on every participating campus."