May 20, 1880, Greencastle, Ind. - On this date, "the first intercollegiate football game was played in Greencastle between [Indiana] Asbury and Butler University, won by the latter by a margin of four touchdowns," notes DePauw: A Pictorial History. "In the afternoon a baseball game between the two institutions ended in a forfeit to Asbury by the score of 9-1 when the Butler team walked off the field for some reason after the sixth inning." (photo shows DePauw's 1889 football team)

DePauw Through the Years, another history of the University, notes, "There was a suggestion that students had engaged in sports as early as 1841, when the trustees instructed President [Matthew] Simpson 'to prohibit students from playing ball against the College Building'... In 1866, just a few years after the game of baseball had been formalized, Asbury was challenged by a game by her neighbor thirty miles to the 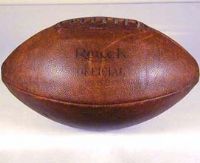 north [Wabash College], and the oldest rivalry west of the Alleghenies was on. For several decades, however, games were highly intermittent."

DePauw: A Pictorial History was written by emeritus professors of history Clifton Phillips and John Baughman, with assistance from professors Harold Spicer and John Schlotterbeck and Wesley Wilson, coordinator of DePauw University's Archives. The text and accompanying photos and illustrations, first published in 1987, can be found online by clicking here.