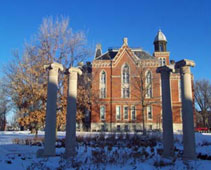 December 2, 1998, Greencastle, Ind. - "It's Our Democracy, Stupid: Money, Media, Politics and the Decline of American Democracy" will be the topic of a speech at DePauw University on Tuesday, Dec. 8, by Lawrence N. Hansen, vice president of The Joyce Foundation in Chicago and former special assistant to U.S. Vice President Walter F. Mondale and U.S. Senator Adlai E. Stevenson. Presented by DePauw's Center for Contemporary Media, the speech is scheduled at 7:30 p.m. in the Center's Watson Forum. It is open and free to the public.

The Joyce Foundation has assets of approximately $800 million and makes grants to non-profit organizations that are located in or have programs that are important to the quality of life in the Midwest. Its program areas are education, employment, environment, culture, gun violence prevention and campaign finance reform.

Prior to joining the foundation, Hansen served as a research professor at George Washington University's National Center for Communication Studies. He directed the university's Democracy Agenda Project, a series of forums that asked people in 19 Midwestern cities how they would reform the American political system. 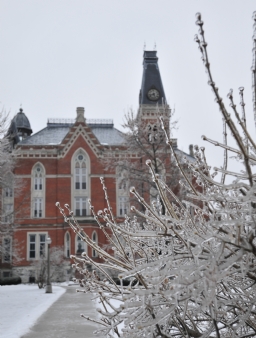 Policy Studies in Washington, D.C., Hansen was a senior fellow and vice president for public programs from 1983-89. In the 1970s he was a top aide to Michael J. Bakalis, Illinois superintendent of public instruction.

Hansen is a prolific writer, and his books include: Heartland Voices: Americans Talk About Money, Politics and Reform; Heartland Voices II: Americans Talk About Elections, Political Competition and the Media; Why Are Elections Over Before the Polls Open?; Reflections: The Press Looks at Itself, Politicians and the Public; Our Turn: Politicians Talk About Themselves, Politics, the Public, the Press and Reform; Renewal: Leadership and Values for the 21st Century; and A Strategy for Excellence: Reaching for New Standards in Education.

Hansen also has served as a consultant to numerous public policy organizations and foundations, including the American Enterprise Institute, Aspen Institute for Humanistic Studies, and the John D. and Catherine T. MacArthur Foundation. As a consultant, he directed The Joyce Foundation's Elections program and in 1994 launched its Money and Politics program.