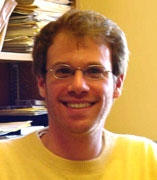 November 12, 1998, Greencastle, Ind. - Most people think that Americans have celebrated Thanksgiving ever since that first harvest feast where the pilgrims and Indians dined together in a symbolic gesture of sharing and ethnic harmony. It's a wonderful story, but, unfortunately, it's just a story.

The image of pilgrims and Indians dining peacefully in Plymouth is just "a national myth that we now teach our school children," says Eric K. Silverman, associate professor of anthropology at DePauw University. Silverman points out that "American Indians were always depicted as savages fighting with the pilgrims until the early 20th century. It wasn't until the United States had decimated and subdued the Indians that there arose a nostalgia in Americans for the image of the peaceful Indians.

"This became important around World War I, when a lot of Americans were worried about recent immigrants disrupting our stereotypical American values. So Thanksgiving became a way to teach immigrants the importance of beliefs such as hard work and tolerance," he says.

Here's how the lesson went: The pilgrims worked hard throughout the year; thus, they had a plentiful harvest. Then they shared their food with the Indians in a show of tolerance between different races and cultures of people.

But the US government created the national holiday for the good of our nation long before World War I. "Thanksgiving is a good example of an event that was used to meet the needs of a nation-state to instill a sense of community among its people," says Silverman. "President Lincoln made Thanksgiving a national holiday to bring the country together at a time when the nation was being fragmented."

Prior to that, some descendants of the original pilgrims recognized a holiday similar to Thanksgiving called Forefather's Day, but the holiday that we now call Thanksgiving did not exist.

As with many American holidays, Thanksgiving is closely connected to economics. President Lincoln specified the holiday to be celebrated on the last Thursday of each November. Then in 1941, President Franklin D. Roosevelt changed the date to what it is today, the fourth Thursday in November. That extended the holiday buying season between Thanksgiving and Christmas on those years when there were five Thursdays in November. The day after Thanksgiving is always the biggest shopping day of the year, and many businesses depend on the sales from this day to make or break their business for that year.

So Thanksgiving traditions have changed to fit the current times. But aren't traditions supposed to be unchanging? Not according to Silverman: "Traditions must change with the times or else they become antiquated and no longer have relevance to the people celebrating them." Creating new traditions and dropping some of the old, boring ones keep traditions exciting and fun.

Just think about it. How much fun would it be if we went back to eating the original pilgrims' food on Thanksgiving? Wheat, corn meal, barley, peas, waterfowl, deer, fish, wild turkey (no white meat), cranberries (without any sugar) and pumpkin (no sugar). Cranberries with no sugar! No, thanks.

So can we still carve a store-bought turkey this year without feeling like a fake? "Sure, we can," says Silverman. "Traditions are important to our country because we are so large and ethnically diverse. We need a way to create a sense of unity and citizenship in people. Since the only native Americans are the American Indians, many Americans often feel dislocated. Ethnic traditions give us a connection to a homeland.

"Thanksgiving is a classic American holiday for many reasons," he explains. "It has no direct religious ties, so it welcomes people of any religion -- unlike Christmas and Easter. It is a way of celebrating ethnic diversity. Families often add their own ethnic foods to the Thanksgiving meal. It is also connected to commercialism, another classic American value.

"And Thanksgiving is even more important than the 4th of July in many ways. Unlike Independence Day, families always come together for Thanksgiving," he says.

So, go ahead. Casserole those green beans and sweeten those cranberries. Because as Silverman says, "Our image of Thanksgiving may paint a rosy picture of America, but that's what all national holidays should do."