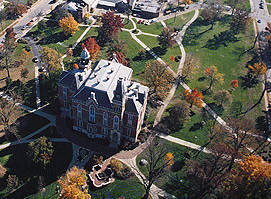 August 21, 1998, Greencastle, Ind. - DePauw University today announced receipt of a gift of over $39,200,000 from an anonymous donor. According to University President Robert G. Bottoms, the gift, as directed by the donor, will be added to the University's endowment, and the income from it will be used to support scholarships.

Dr. Bottoms stated, "Last October the University completed the first year of its current 'Campaign for DePauw: Leadership for a New Century.' The Campaign had a goal of $153 million. This gift will bring the Campaign total to $191 million. Its scheduled completion date was July 1, 2000. Although this gift takes us 'over the top' two years ahead of schedule, the Campaign is not over. This $39 million gift creates the opportunity for the University to accelerate its climb among the nation's leading liberal arts colleges. It increases DePauw's endowment funds to a total of some $340 million."

Members of the DePauw campus community and other DePauw leaders will now reconsider priorities and strategies to enhance the DePauw academic program; from these continued discussions will come the revised objectives of the Campaign. The first draft of these data was presented to the Board of Trustees for discussion at the board's January meeting earlier this year. The Board, at its October meeting this fall, will further refine these priorities and strategies.

"The $153 million Campaign was born of necessity," said Dr. Bottoms. "The shared vision of moving the University to the next level meant providing reforms to strengthen teaching and learning. It was conceivable, even from the beginning of the Campaign, that our proposals might require more resources than we initially hoped to raise. Coupled with the vision of strengthening the academic life of the University was our desire to assure that students with the greatest potential could afford to come to DePauw without causing increased demands on the unrestricted funds of the University or on their families."

"This magnificent gift, plus the generosity of thousands of other donors to the Campaign to date, makes it possible to enlarge our vision beyond what we dared to imagine a scant two years ago," commented Timothy H. Ubben of Chicago, Campaign chair and newly elected chair of the Board of Trustees. "Over the past five years, gifts made to DePauw have exceeded that of every private liberal arts college in the Midwest. DePauw alumni have been the primary source of that support."

"DePauw University is a proud family," noted Mr. Ubben. "While the success of the Campaign and the new $39 million gift to the University both will enhance the reputation and recognition of DePauw University as a prominent institution, the greater significance is the University's increased potential to invest in the intellectual and personal growth of its faculty and students."