Governor Evan Bayh to Discuss 'State of Our State' at DePauw 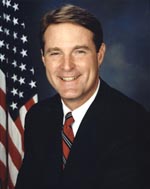 October 24, 1995, Greencastle, Ind. - The Governor of Indiana will make a special visit to DePauw University today and speak at 7 p.m. at the Center for Contemporary Media, Watson Forum. The Title of the Working Press event is "The State of Our State: A Conversation with Governor Evan Bayh." Bayh will talk about his term as governor of the State of Indiana, including his future plans once he is no longer in office. He will also take questions from the audience along with the Greencastle community by telephone.

Evan Bayh was elected Indiana's 46th governor in 1988 and reelected in November 1992. Today he will discuss some key issues that occurred during those terms, including education, job creation and economic growth in the state. According to Fortune magazine, under Bayh's leadership Indiana ranked second in the nation in 1992 in the creation of new manufacturing jobs. His leadership and his record in office led TIME magazine in 1994 to name Bayh one of American's 50 most promising leaders under age 40.

The Center for Contemporary Media sponsored event will be telecast live on Greencastle Cable Channel 2 and DePauw Cable Channel 3. Governor Bayh's presentation is free and open to the public.