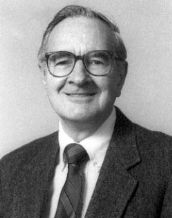 May 16, 1995, Greencastle, Ind. - Robert O. Weiss, DePauw University professor of communication arts and sciences and Harry B. Gough Professor of Speech, is the 1995 recipient of the Mr. and Mrs. Fred C. Tucker Distinguished Career Award which honors senior faculty members for "distinguished contributions to DePauw by their commitments to students, teaching, disciplines and University service." The award includes $10,000 to the recipient. DePauw President Robert G. Bottoms announced the recipient of the Tucker Award at the Faculty Recognition Dinner on May 12.

Weiss, who joined the DePauw faculty in 1955, has played a leadership role in changing the rules by which debate tournaments are conducted and judged. Many debate tournament directors are adopting "the audience standard" that was proposed by Weiss in 1985. He developed the audience standard so that debaters would not be judged solely on technical merit but rather on how effective their arguments would be on a public audience.

Weiss is the author of a new book, Public Argument, which was published in late April by the University Press of America, Inc. In particular, his book provides guidance to students in argumentation courses that feature parliamentary-style debates involving an audience. Dr. Weiss also received the "Outstanding Scholarly Contribution" award from the National Educational Debate Association at the NEDA national tournament in March.

Also presented at the annual faculty dinner was the Minar Scholarship Award to John Dittmer, professor of history at DePauw since 1985 (seen at right). Named for Edwin L. Minar, a former DePauw professor of classical studies, the award recognizes faculty members who achieve an exceptional scholarly record.

Dr. Dittmer spent nearly 15 years researching and interviewing sources for his book, Local People: The Struggle for Civil Rights in Mississippi, which was published in June 1994. The book received the prestigious Herbert G. Gutman Award, the Lillian Smith Book Award, the McLemore Prize from the Mississippi Historical Society and the Bancroft Prize. The New York Times named Dittmer's text one of the "Notable Books of 1994."