September 22, 2004, Greencastle, Ind. - Deborah L. Rhode -- Ernest W. McFarland Professor of Law, director of the Stanford Center on Ethics, and author of a dozen books including Speaking of Sex: The Denial of Gender Inequality -- will deliver the Women's Week convocation at DePauw University this Thursday evening. Professor Rhode's speech, "The Difference 'Difference' Makes," will begin at 7:30 p.m. in the Performing Arts Center's Kresge Auditorium and is free and open to all.

The professor is widely quoted on the day's ethical issues, including affirmative action: The claim that people should be treated on the basis of individua 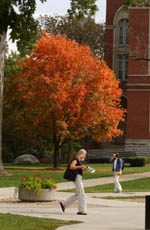 l rather than group characteristics certainly sounds right, but it comes several generations too early and several centuries too late;" and sexual harassment: "For centuries women have been harassed and it was only a problem for them. Now men in positions of power have to worry as well, and that's a good thing. You've seen a lot of responses by institutions to implement policies and procedures and training programs that are dealing with the issue at the preventive level. And that's a sign of enormous progress. We're still, as a country, trying to sort out where the boundaries are, and these cases are clarifying in some respects."

Of Rhode's new book, Access to Justice, consumer advocate and presidential candidate Ralph Nader writes, "Deborah Rhode has jolted a million lawyers with a wake-up call. She urges them to open the doors to the unmet need for justice by most of the people who cannot afford their services. A challenging book for anyone, not just lawyers and law students, who believes that justice can be done if we have the will to pursue it."

Besides the lecture by Professor Rhode, other Women's Week events include:

In addition, "Empowered: Portraits of DePauw Women Students," a permanent photography exhibit by artist Lydia Butler will be on view at the Women's Center. Like the Deborah Rhode speech, all Women's Week events are free and open to the public.