September 2, 1912, Indianapolis, Ind. - DePauw University's Board of Trustees, while meeting in Indianapolis on this day, voted to offer the presidency of DePauw to Dr. George Richmond Grose, pastor of Grace Methodist Episcopal Church in Baltimore, Maryland. Grose accepted the position, and replaced Francis J. McConnell, who had served as president of DePauw since 1908 and had to leave the University after being elected a bishop of the Methodist Episcopal Church. Grose became the tenth president in the University's history.

"The new president made his first official appearance on the campus when, on October 20, he gave the address at the regular university monthly service," William Warren Sweet writes in his history of DePauw. "His inauguration, however, did not occur until the following April. This occasion was unique in the history of the college in that four former presidents were present to take part in the installation. Sixty-one other institutions of learning sent representatives."

Dr. Grose, after being given the charter and keys of the University, told the gathering, "I accept these symbols of the responsible trust which you this day place in my hands. I pledge all my strength and constant endeavor to serve the interests and keep alive the high ideals and noble traditions of this institution of learning." 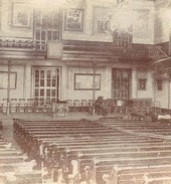 Sweet wrote in his 1937 book, "No administration in the history of DePauw University ever began more auspiciously than did that of President Grose, and no administration ever more completely fulfilled the expectations entertained at its beginning."

Another book, DePauw: A Pictorial History, states: "Grose in 1924 he was himself elected a bishop of the Methodist Episcopal Church and left Greencastle to take up his new post in China. He later returned to the United States to become the editor of a religious periodical in California ... Grose died in 1953."