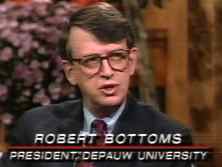 [Download Video: "Reducing Access" - 1056kb] "There's a definite pool of money appropriated by the government, and students going to trade schools have been getting a larger and larger share of that pool and that does disadvantage our students," DePauw University President Robert G. Bottoms told NBC's Bryant Gumbel on the network's Today Show this morning. Dr. Bottoms was on the program to discuss how access to federal student loans has been broadened in recent years, so they're increasingly available to students who choose to attend for-profit trade or technical schools. The president says that's having negative ramifications for students who want to attend traditional 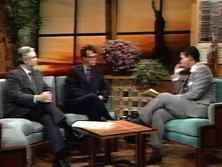 Those being hurt, Bottoms says, are "primarily students who need loan money to be able to afford their college education... They're not getting the kind of fiscal support that they need to come to schools."

In a lively debate with Stephen Blair of the National Association of Trade and Technical Schools, Dr. Bottoms asserted,

[Download Video: "Negative Perceptions" - 1756kb] "We are not, in any way, arguing that trade schools or for-profit schools should not have access to some loan monies. But what is happening, and the way college students