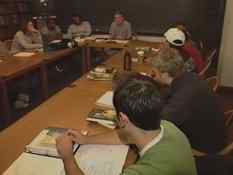 [Download Video: "Creating Ethical CEOs" - 1366kb] "DePauw University is known for turning out CEOs," states a report by UMTV, the United Methodist Television News Service. "Now its professors and chaplains, like the Reverend Larry Burton, are teaching students not just how to make a living, but how to live with the decisions they're making." A crew came to campus in September to shoot the story, which is now being distributed worldwide. The segment examines the importance of including ethical discussions in college curricula.

"Whether it's Martha Stewart's insider trading or Enron's financial corruption, what seems to be a lack of ethics at the executive level has caused heartache for thousands," the report notes, as it looks at how DePauw challenges 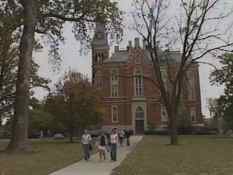 its students to consider all implications of the decisions they will make in their lives. "I want them to feel that dilemma -- whether it's a visceral pain or a mental pain or whatever -- that's there's a sense of, no, there's something really at odds with me in being asked to do this, whether it's cooking the books or telling not quite the truth," Rev. Burton explains in the story.

[Download Video: "Critical Reflection" - 829kb] "A DePauw University ethics class is forcing students to think about the consequences of their decisions." Dr. Smith tells the reporter, "I think critical reflection on moral issues in the long run is going to make a big difference in the way people behave." 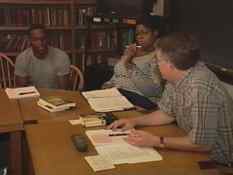 The story was produced by Nashville, Tennessee-station WSMV-TV (the flagship of UMTV), then uploaded via a CNN satellite to local television stations around the world. You may see it on a local station in your area in the coming days or weeks. You can see the clip online at UMTV's Web site by clicking here. Read a previous story about the video crew's visit to campus here.