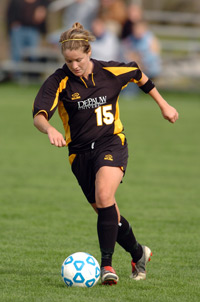 Rinaker, a 2003 all-America selection, earlier was named to the 2004 All-Southern Collegiate Athletic Conference First Team and was the conference's co-Defensive Player of the Year. Rinaker solidified the Tigers' defensive presence from the midfield. She also added a game-winning goal against Earlham.

Nickols led the Tigers with eight goals, seven assists and 23 points and was a first team all-SCAC selection this year.

The Tigers finished the 2004 season with a 10-4-2 record and, for the sixth consecutive year, were ranked in the top 25 of the final coaches' poll. DePauw finished 18th in the final national poll.