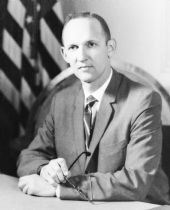 February 16, 2005, Greencastle, Ind. - "Like his hero, Adlai Stevenson, he was a man of genuine compassion: Peace and the dignity of human beings was very near his heart," notes a story in Illinois' Pekin Times on 1948 DePauw University graduate John T. McNaughton. In July 1967, having recently been confirmed by the U.S. Senate as the nation's next Secretary of the Navy, McNaughton and his wife and son were killed in a plane crash. The article recalls McNaughton's spirit and personality, his service in World War II and how he was recruited to serve in government by President John F. Kennedy.

"John worked hard," writes William Toel. "That's how you get to DePauw University, Harvard Law School and Oxford University. That's how you get recognized as a Rhodes Scholar -- and that is what President John F. Kennedy saw... His boss, Secretary of Defense Robert S. McNamara, had let it be known privately that, as his closest advisor, McNaughton could well be his choice to replace him as the next Secretary of Defense."

Access the column at the newspaper's Web site by clicking here.

DePauw honors the memory of John McNaughton with the McNaughton Medal for Public Service, which has been awarded on seven occasions. After the tragic events of 1967,