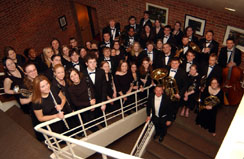 April 11, 2005, Greencastle, Ind. - The DePauw University Band and conductor Craig Paré will present a concert on Sunday, April 17 at 3 p.m. in Kresge Auditorium of the Performing Arts Center. The performance is free and open to the public, and features guest conductor John Lynch, director of bands at the University of Kansas. Dr. Lynch will also be on campus from April 14-17, working with the University Band as well as teaching a variety of classes.

“As a talented young conductor, Dr. Lynch brings to our DePauw students a wealth of experience, musicianship, and creativity,” says Paré. “He is a highly respected and nationally-recognized conductor, teacher, and musician. I am certain that our DePauw musicians will benefit from his perspectives on conducting and making music.”

John Lynch is among the foremost band conductors in the United States. He holds a bachelor of music degree from Indiana University, a master of music degree from the Eastman School of Music, and a doctor of musical arts degree from the Cincinnati College-Conservatory of Music. In addition to his current position with the University of Kansas, he has been associate director of bands at Northwestern University and director of instrumental music at Emory University. Lynch also held positions as music director of the Northshore Concert Band, Atlanta Youth Wind Symphony and the Orange County Music Educators Wind Ensemble. In addition, he is the winner of the William Revelli Award and is the national recipient of the Stanbury Award for outstanding teaching and conducting.

For the Sunday program, the DePauw University Band will play a program that features Ralph Vaughan

“It is a great opportunity for our students, and I hope they will take full advantage of all that Dr. Lynch will share with us,” adds Professor Paré.