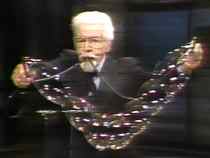 April 1, 1987, Greencastle, Ind. - Eiffel Plasterer -- a 1924 graduate of DePauw University who is known to thousands of children and television's David Letterman as "Professor Bubbles" -- was profiled on Fort Wayne, Indiana CBS affiliate WANE today. "He's 87 years old, he's been a teacher and farmer in Huntington County, and for the past 55 years he's been blowing soap bubbles for audiences of all ages," reported Ken Owen, WANE's news anchor and a 1982 graduate of DePauw.

The lengthy piece, which can be seen by clicking the above link, includes an interview with Plasterer and a clip of his appearance on Letterman's national late night program. It's also embedded below.