July 3, 2005, Greencastle, Ind. - DePauw University provides more than $176 million in benefits to Central Indiana on an annual basis and its activities create jobs that employ 2,335 people, according to an independent economic impact study. The Louisville, Kentucky-based EconImpact performed a comprehensive review of the University over the 2003-04 academic year. The findings, just released, show that one dollar of every $10 in business spending in Greencastle is generated by DePauw; the ratio is 1 to 12 for all of Putnam County.

"It was our desire to learn more about DePauw's impact on the local economy, particularly job creation and tax revenues provided by employees, says Richard Speller, vice president for administration and finance at DePauw University. "As county governments face economic challenges we wanted to better understand how DePauw supports the business environment and people's ability to find jobs. Like earlier studies, this one shows that DePauw's impact on Greencastle and the surrounding communities is extremely positive."

EconImpact's Kevin B. Stokes made several trips to the area over approximately six months visiting the campus and the

community to interview DePauw administrators and Putnam County community and business leaders. His report tallies the impact of University spending and hiring, and the ripple effect those dollars have. The study's analysis of students only takes into account revenue from DePauw undergraduates who come to the University from outside of an eleven county area (Boone, Clay, Hendricks, Marion, Monroe, Montgomery, Morgan, Owen, Parke, Putnam, and Vigo Counties). "Since this revenue derives from outside the region, it is new money to the region," Stokes notes. His analysis utilizes "multipliers" derived from the U.S. Department of Commerce to ascertain how spending by the DePauw community impacts the local economy when combined with successive rounds of re-spending of the initial dollars in the region.

Breaking it down, the University's impact on Greencastle is:

The report also notes the many camps and athletic events DePauw hosts on behalf of the community, and spotlights the new 481-acre DePauw Nature Park as an asset that benefits 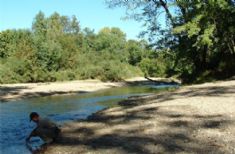 all who live in the region and will serve to draw more visitors to Putnam County in the future.

"It's really something to see the many things DePauw does and oversees listed in this fashion," Speller added. "We're proud of our strong, nearly 170-year history in Greencastle, and excited that in the years to come we can do even more to benefit the local economy and those who call Putnam County home."