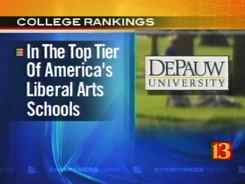 [Download Video: "Dr. Bottoms on WTHR" - 344kb] "DePauw remains in the top tier of America's liberal arts colleges," Linsey Davis noted in her report on Indianapolis NBC affiliate WTHR's 6 p.m. newscast tonight. Davis examined how Indiana colleges and universities fared in U.S. News & World Report's 2006 edition of "America's Best Colleges." The story includes a comment from DePauw President Robert G. Bottoms, who tells the television station, "This is the sixth year in a row we've been listed in the top tier. We're very pleased with that, and I think it's a credit to our faculty and the quality of the students we have here."

The Fiske Guide To Colleges 2006, released earlier this month, ranks the University as one of 45 "best values." Read more in this previous story.