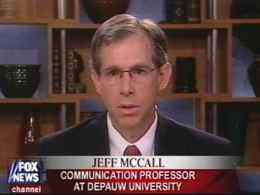 [Download Video: "Obligations of Journalists" - 2888kb] "Journalists owe the public accuracy and they owe them facts, and when they make mistakes they need to go forward with a straight face and in a civil tone to get those things cleared up," Jeff McCall, professor of communication at DePauw University, told cable television's O'Reilly Factor tonight. For the second time this week, McCall was a guest on the FOX News program again discussing the ongoing feud between host Bill O'Reilly and the Dallas Morning News. O'Reilly has asked the newspaper to retract a column on immigration by by Macarena Hernandez that suggested, in the host's words, that he embraces "hatred and intolerance." The newspaper has refused to issue any kind of correction.

"There's a crisis in journalism today, and it's not just me saying that," stated Dr. McCall, a 1976 graduate of DePauw. "Many polls indicate that the public is losing confidence with the way the news reporting industry is working today," he added. The professor cited several surveys, including a Pew Research poll that found 56% of Americans believe news organizations often report inaccurate information, and that 62% believe the media try to cover up mistakes. "Fifty-three percent of the public say news organizations are biased," McCall also pointed out. "What we're seeing this week with the Dallas Morning News example here fuels these kinds of poll numbers and it's not helpful."

Host Tony Snow, who sat in for Bill O'Reilly, asked Professor McCall if a reporter has "the right to his or her own 'truths'?" McCall responded,

shame in correcting errors that are made. It's just natural when you're dealing with a lot of facts and a lot of issues that there are going to be errors from time-to-time, and when there are errors let's step forward in a civil tone and say, 'Let's fix those.'"

McCall discussed the same issue on the program Tuesday night, when he stated, "I think there's kind of a false sense in the media now that you have to be shrill in order to get attention." A story including video clips from the show can be accessed by clicking here.