DePauw Sells Out its Allotment of Monon Bell Tickets

Also: Game to be Nationally Televised on DirecTV 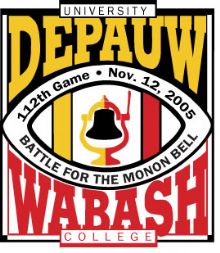 October 27, 2005, Greencastle, Ind. - It's official: the 112th Monon Bell Classic, set to be played at DePauw's Blackstock Stadium on Saturday, November 12, is effectively a sell-out. The last of DePauw's allotment of tickets for the game were sold early this afternoon.

[Download Audio: "Hear The Ballad of the Monon Bell" 2900KB]

The series is tied 51-51-9 with DePauw holding a 35-32-6 lead in Monon Bell games after last year's 14-7 win in Crawfordsville. For the second straight year, the game will be telecast nationally on DirecTV Channel 321 and locally on

WHMB (Channel 40 in Indianapolis). Alumni parties are being planned in dozens of cities across America. You can pre-order your DVD of this year's contest and order copies of the 2004, 2003, 2002 and 2001 Bell Battles here.